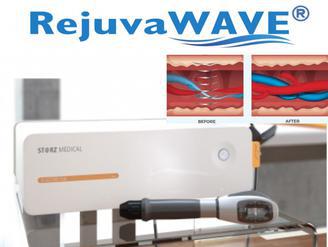 Although ED Shockwave treatment is new to the United States, shockwave therapy for ED has been used in Europe for over twenty years.

In 2015, Simply Men's Health revolutionized the treatment for erectile dysfunction by introducing their exclusive shockwave therapy, RejuvaWAVE® to South Florida.

How does Shockwave Therapy work for ED?

Unlike pills that just treat the symptoms, RejuvaWAVE®, treats the root cause of the erectile dysfunction. As a result, this therapy reverses the underlying cause and restores spontaneous sexual function in over 85% of men.

There are several ways in which RejuvaWAVE®, works to restore spontaneous sexual function:

First, the acoustic shockwaves break up plaque build up in the blood vessels and restores blood flow.

Second, the shockwaves cause micro trauma and regeneration. As a result this stimulates the regeneration and growth of new blood vessels.  So RejuvaWAVE®  shockwave therapy restores penile blood flow by breaking up plaque and growth new blood vessels.  Most men who have heart disease, high blood pressure or diabetes have erectile dyfunction due to decrease blood flow.   Therefore, Shockwave therapy is a very effective treatment to restore spontaneous erections.

Finally, shockwave therapy increases sensitivity by stimulating the regeneration of nerve tissue. Therefore, RejuvaWAVE® can even restore sexual spontaneity to men who have ED from nerve damage after prostate cancer surgery.

Simply Men's Health is a pioneer in Men's Sexual Health. We revolutionized the treatment of ED with RejuvaWAVE Shockwave. In addition, we were the first to combine Shockwave with PRP therapy.

As one patient, who is in his 70's and has diabetes, heart disease and prostate cancer surgery, describes his experience: RejuvaWAVE® was good. Adding Priapus Shot® turned me into Superman. !"

Learn how RejuvaWAVE® Shockwave therapy can help you

Simply Men's Health RejuvaWAVE® is cutting-edge, state-of-the-art therapy. Shockwave therapy is non-invasive and is essentially painless. Although it is painless, the comfort of our patients is our primary concern, we usually apply a topical numbing cream. The therapy is similar to getting an ultrasound, in that the acoustic waves are applied externally by a hand held wand, except it makes quite a bit of noise.

Although this technique is relatively new to the United States for ED treatment, Shockwave therapy has many applications in medicine in addition to treating Erectile Dysfunction.

Simply Men's Health specializes in men's sexual health. Not only our we the # 1 Erectile Dysfunction clinic in South Florida; in addition, we are innovators in the field Men's Sexual Health.

Call Simply Men's Health, South Florida's Leader in Men's Sexual Health for an appointment or to learn more about our treatment options: 561-232-3704